Taskers custom makes flags for your business or company. Any size, any design. Great Taskers quality

How will I know what size  I should get? 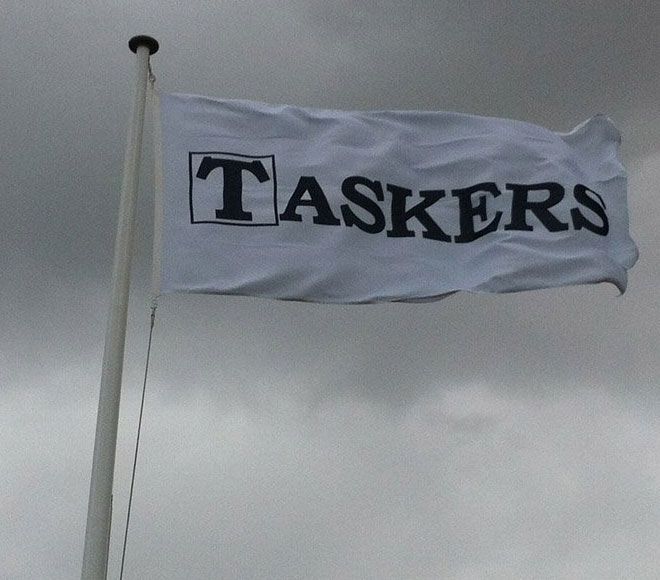 Taskers manufacture and distributes an extensive range of aluminium flag poles from 6 metres to 12 metres for flags and windsocks.

There are many different options including untapered and tapered flag poles, external and internal halyards, spigot bases and hinged bases.

If you are planning your flagpole(s) for a public place which has a large volume of foot traffic and is unsecured, it is well worth considering the internal halyard “security” option, which will ensure your flag  does not get stolen.

For home use, we recommend the 6m white flagpole or 7.5m tapered pole. Our flag size recommendations are just that, so feel free to select whichever size you prefer! Please  contact us  so we can provide a price for your particular requirements.

Taskers stocks both Australian and West Australian flags in a variety of sizes from from ½ yard to 4 yards. Flags of other nations and clubs are also available on request.

Not only does Taskers supply flag poles to industry, government and residential clients, we install the entire pole, rated to the required Australian Standard Wind Zone. Ie Region D – Cyclone.

Raise the flag briskly and lower it ceremoniously

When the flag is raised or lowered or is carried in a parade or review, everyone present should be silent and face the flag and people in uniform should salute

The Australian National Flag should be raised first and lowered last, unless all other flags at the ceremony are raised and lowered simultaneously

When the Australian National Flag is flown with flags of other nations, all flags should be the same size and flown on flagpoles of the same height

The Australian National Flag should fly on the left of a person facing the flags, when it is flown with one other national flag

Do not fly two flags from the same flagpole

Only fly the flag at night when it is illuminated

Do not fly the flag if it is damaged, faded or dilapidated

When the material of a flag deteriorates it may either be placed in a permanent place of storage or should be destroyed privately and in a dignified way such as cutting it into small unrecognisable pieces, placing it in an appropriate sealed bag or closed container and then putting it in the normal rubbish collection. An outline for an optional flag retirement ceremony is provided below.

Do not fly the flag upside down, even as a signal of distress.

Information on the protocols for displaying and folding the flag can be found in Part 2 of the booklet Australian flags, which is also available from your Federal Member of Parliament or Senator.

What Our Clients Say

With a commitment to providing our clients with a quality product backed by exceptional workmanship and customer service you won’t be disappointed with Taskers.

We have had a Taskers shade sail since December 2013 and it is fantastic. Not only does it look fabulous and give us so much more usable space in our backyard, the UV protection it provides means or little boy has had so much fun outside ..

Or simply fill in the easy form below and one of our friendly team members will get back to you as soon as possible.