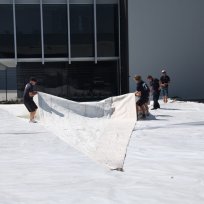 In August 2009 Taskers were approached by Evolution Yachts to service the sails on the worlds biggest sailing vessel “EOS” which was due into Fremantle from Singapore for a comprehensive re fit.

Taskers were regarded as the only facility in Perth, capable of servicing such large sails, the biggest measuring 55m x 24m or 632m2.

Some part time labour was employed to help handle the sails during the maintinence process and the eventual folding so that they could be delivered back to the yacht in Fremantle.

The whole excercise took a month to complete with up to eight persons working on the sails through out the contract.

Contact us now for obligation free expert advice or a free quote.
Go to Top